ArtROCKS! Inspired by KAWS at NorthPark 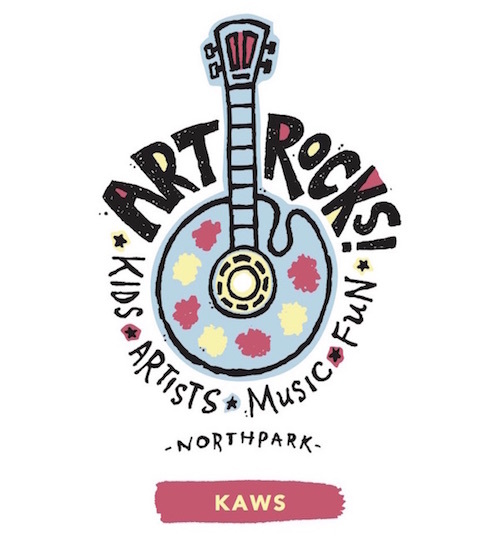 If you’ve been to an ArtROCKS! event at NorthPark Center before, then you already know the drill – awesome art activities inspired by famous and notable artists for your kids to get creative with, from 1-4PM at NorthPark. This weekend’s event is no different, and the artist of honor is KAWS! You may have noticed two new works on view at the center by Macy’s – a sculpture that bears a striking resemblance to a certain cartoon character (I won’t name any names), and a larger-than-life painting series in bright day-glo colors. Both of these two new works are by Brian Donnelly, or, the name he goes by when creating art, KAWS.

Brooklyn-based artist, KAWS was born in Jersey City, New Jersey and received his BFA in illustration from the School of Visual Arts, New York. KAWS began his career as a graffiti artist, tagging surfaces around New York with the letters K A W S on his frequent trips into the city to skateboard. By the early 1990s, KAWS began to tag in a more conscious way – through subverting and subtly altering bus shelters, phone booths, advertisements, and billboards with his signature, cartoonish, style of illustration and painting. Today, he is considered one of the most relevant artists of his generation.

KAWS has masterfully straddled the elite world of fine art and the grungier world of street art and skate culture. His work is instantly recognizable with a common visual vocabulary consisting of the soft skull with crossbones and crossed-out eyes and child-like characters, albeit with darker, subverted appearances. In fact, after college, KAWS freelanced for various notable animation studios, presumably leading to his appropriation of iconic characters from popular culture and comic books.

To explore KAWS’ body of work, we are partnering with some fantastic local artists and art instructors to lead fun and engaging art projects for the kiddos. Design Within Reach also graciously provided outdoor furniture for the event and JT Donaldson will be DJing. See you there!