Experience the Cliburn with NorthPark Center 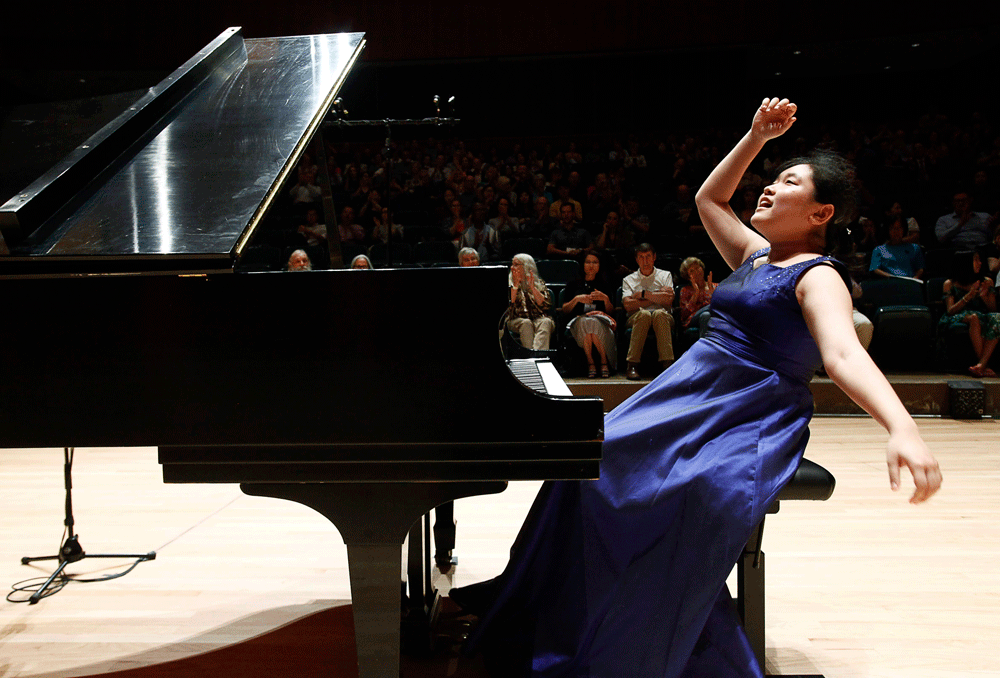 Watch together on The Cliburn's Facebook and relive some of the best moments of the Van Cliburn International Piano Competition in a global watch party on Thursday, July 23, and Thursday, August 6.

An exclusive premiere featuring artists from past Junior, Amateur, and Van Cliburn International Piano Competitions will air on NorthPark's Facebook on Thursday, August 20 at 8PM.

Learn more about the talented artists:

JIWON YANG
With an “impressive technique and natural bravura,” JiWon gained fans at the 2019 Cliburn Junior. Since making her recital debut at age 9 in Seoul and her concerto debut at 13 in Kazahkstan, she has participated in concerts, festivals, and competitions in North America, Europe, and Asia. Notable performances include with the Salzburg Chamber Soloists, and at the Cultural Center of the Philippines and Philippines Chopin Society. She has recently accepted into the Mannes School of Music and looks forward to moving to New York in the fall to study with Richard Goode and Pavlina Dokovska.

EVA GEVORGYAN
At just 16, Eva is already building an international reputation for “electrifying emotional intelligence” and “an astonishing sense of style.” With over 40 international competition wins under her belt for piano and composition, Eva was also named Discovery Award winner at the 2019 International Classical Music Awards. Notable performances include those with the Lucerne Symphony, Mariinsky Theatre, and Dallas Symphony Orchestras, working with conductors Valery Gergiev, Vasily Petrenko, Lawrence Foster, and Gerhardt Zimmermann. She made her Royal Albert Hall debut in 2019, and has performed for the presidents of Armenia and Italy. She is a student at the Central Music School of the Moscow Conservatory, where she studies piano with Natalia Trull and composition with Tatiana Chudova.

SHUAN HERN LEE
During last year’s Cliburn Junior, Shuan was heralded for “emotional command and vigorous sweep,” demonstrating “style, technique, and depth and breadth of musical imagination.” He has performed across Europe and his native Australia, as well as in the United States, China, Russia, and Indonesia. Notable collaborations include those with the Minnesota, Moscow State, Armenia State Philharmonic, Jakarta Symphony, and Dallas Symphony Orchestras. He just finished his third year of study at the University of Western Australia, where he is pursuing a BA in piano. He also attends the International Piano Academy Incontri col Maestro (Italy), where he studies with Ingrid Fliter, as well as continues studying with Yoon Sen Lee, with whom he started lessons at age 2.

THOMAS YU
Thomas is one of the most recognized amateur pianists in the world, maintaining a performance schedule across five continents while also running a private periodontal practice, teaching at the Foothills Medical Hospital, and giving lectures across Canada. His passion for music was influenced by two private teachers and mentors: he grew up studying with Bonnie Nicholson in Saskatoon, and later with Marc Durand, when he moved to Toronto for post-graduate periodontal training. Even as he pursued another professional path, he remained dedicated to music, entering the amateur world by sweeping the Paris International Competition for Outstanding Amateurs in 2006. He capped off a run of the major international amateur competitions over the next decade with his Cliburn Amateur appearance in 2016, bringing home the first, press, and audience prizes.  He’s taking advantage of his time at home in Calgary, taking turns with his wife running after two toddlers and recording rock covers for his popular YouTube channel.

RACHEL CHEUNG
In the three years since the Competition, Rachel has grown her reputation for “stunningly imaginative” performances marked by “flights of both beauty and virtuosity.” She has been recognized as Artist of the Year (Music) by the Hong Kong Arts Development Council; made her play/conduct debut with the Orchestre de chambre de Paris; joined the Asian Youth Orchestra on a friendship tour throughout the continent; and been in residence with the Hong Kong Philharmonic, RTHK Radio 4, and the Chamber Music Heidelberger Frühling. Born and raised in Hong Kong, Rachel graduated with first class honors at the Hong Kong Academy for Performing Arts and went on to the Yale School of Mmusic, where she was awarded the Elizabeth Parisot Prize for outstanding pianists. An amateur photographer, she enjoys documenting her tours across Europe, North and South America, and Asia with her analog camera.

AVERY GAGLIANO
Just 19 years old, Avery continues to build an international profile, captivating fans with compelling performances of emotional depth and sensitivity. Most recently, she was named first prize and concerto winner of the 10th National Chopin Competition this spring, with awards including a recital tour and her debut recording in the upcoming year. She has performed throughout Europe and the United States, notably at the Verbier Festival Academy, Ravinia, and Aspen Music Festivals, Louis Vuitton Foundation (Paris), Jay Pritzker Pavilion in Millenium Park (Chicago), and the GRAMMY® Salute to Classical Music at Carnegie Hall. Avery began playing piano at age 5 and made both her recital and concerto debuts at age 9. Originally from Washington, D.C., she currently lives in Philadelphia, where she studies at the Curtis Institute of Music with Gary Graffman and Robert McDonald; she has also studied with Jonathan Biss while at Curtis.